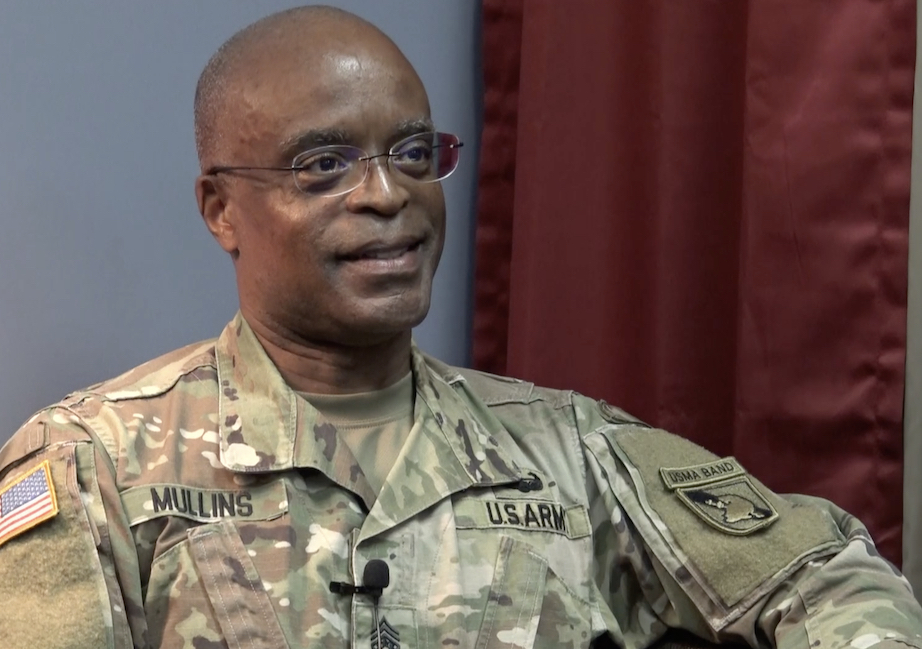 James Mullins
CSM James Mullins grew up in Florence, Alabama, with his parents and younger sister. His father was a cabinet maker, and his mother was the Director of Dietary Services at the hospital in Muscle Shoals. While in kindergarten, James began playing the piano, and as he grew older he began playing the Saxophone. He recalls listening to the Chicago symphony on NPR with his mother, and being intrigued by the sound of Ray Still playing the oboe. He began playing the oboe in high school and eventually picked up the English horn, an instrument he still favors because of the depth of its sound. While still in high school, he received the opportunity to audition for an Army band, which led to his enlistment as an 02H (oboe player). He attended Basic Training at Ft. Jackson, South Carolina, and remembers the influence of his Drill Sergeant, who enforced rigorous PT (physical training). He appreciated meeting new people from around the country, noting that Basic was his first time away from home. He left the Army when his enlistment ended in 1989, realizing that he would not be able to master his craft in the military, and decided to attend Virginia Commonwealth University (BA cum laude in 1993) and the Peabody Institute of Johns Hopkins University (Master’s Degree in 1995), where he studied under Joe Turner. He then reentered the Army in 1995, and was assigned to the Army Ground Forces Band at Ft. McPherson in Atlanta as the principal oboe. The next year he joined the West Point Band as the assistant principal oboe and solo English horn player. During his time at West Point, he served as Drum Major, the Woodwind Group Leader and Administrative NCOIC, the Concert Band NCOIC, and Family and Support Division NCOIC. Currently, he is the Band’s second Command Sergeant Major. In this interview, he talks about his childhood, his interest in music, joining the Army, continuing his music education, and taking on positions of increasing responsibility. He describes different bands he has been in, and performance opportunities he has experienced through the years. As a member of the West Point Band, he discusses the “Bottom Up Review of Army Bands” and his work with Cadets in other fields. Finally, he reflects on his pride in the accomplishments of the people he has worked with, and his developed as a leader who focuses on helping others.

James Mullins
“There’s Inspiration Everywhere”: A Journey From Member To Leader Of The Band